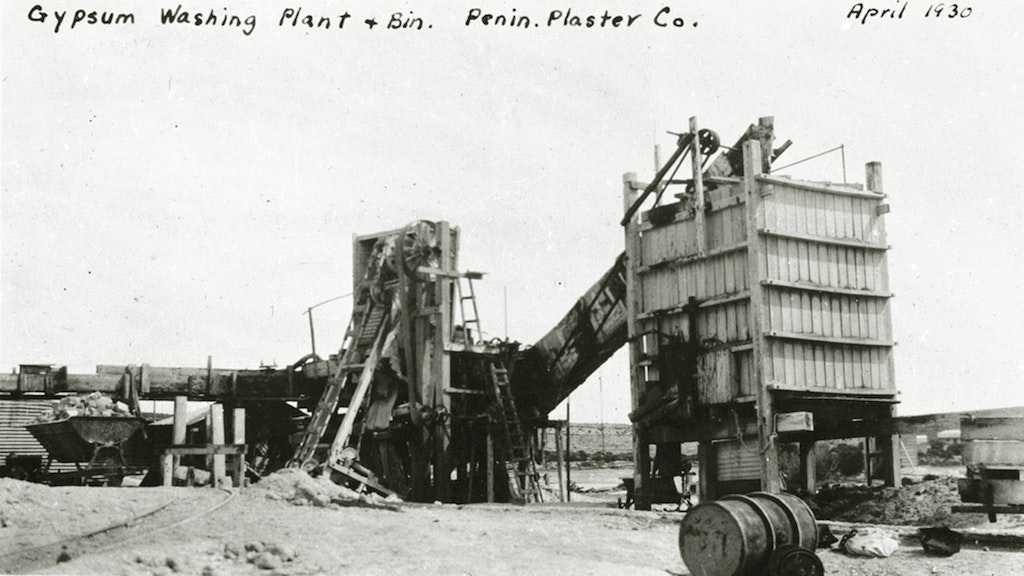 The history of Marion Bay, Inneston and Stenhouse Bay, 1922-1939 by Keith Kitchener Nelson

Inneston - The name was applied to a post office on Yorke Peninsula, 10 km North-West of Stenhouse Bay, while an article titled ‘Founding a New Town’, in 1927, said that ‘it was named, with due ceremony, after its founder, Mr W.R.D. Innes’, a director of the Peninsula Plaster Company that took up leases for the harvesting of gypsum, north of Cape Spencer.

Its former name was ‘Cape Spencer’ and its school, opened under that name in 1919, was changed to Inneston in 1928; it closed in 1950.
In October 1927 it was said that ‘Inneston did not exist as a town until last Sunday’:

It did not grow overnight, but the hundred inhabitants had been so busy bringing it into existence during the last ten years that nobody had time to think of describing it as other than ‘the camp at Cape Spencer’.

Actually the camp consists of a number of stone houses and a manufacturing plant working 24 hours daily converting crude gypsum into plaster of Paris. Members of the party decided that the town should have a name, and it was named with due care after its founder (Mr W.R.D. Innes) ... The men employed at Inneston are contented. They are provided with home rent free

Photographs are in the Chronicle, 11 October 1924, page 40.
A contemporary newspaper report said that ‘visitors to Cape Spencer were comparatively few’:

But it is surprising that so little is known about this model settlement - an industrial organisation that knows no labour disputes, where the masters and men mingle as equals, where foremen are unknown, where a fair task is allotted to every man and where the principal of a fair deal is put into practice... Cooperation has brought satisfaction.

Although the whole settlement is controlled by the promoters, no restrictions are placed in the way of other business people and traders who may desire to enter. They have not come. The men belong to the union. Masters and men live together in complete harmony, ministering to each other’s welfare - an inspiring example to other industrial organisations, a monument to the enterprise and humanitarianism of the founder, and a credit to Australia.

In the early days of the settlement the workers were housed under canvas but, as the company flourished, it built substantial stone houses and gave them to the married men, rent free, while bachelors were supplied with quarters for board and lodging at nominal rates. A community hall was erected, fitted with a piano and gramophone, and a post office and school built at company expense. By 1927, there were 80 men on the payroll and, at that time, few communities in South Australia could match the number of motor cars per head of population.

The residents lived well; ‘only the best quality goods [were] demanded and the store [sold] up to six hundred- weight [sic] of chocolates per month.’ Although the settlement was within 80 kilometres of larger peninsula towns it was isolated except by sea communication. To ease this situation the company established its own mail, telegraph and postal services.

Mr Innes constructed nine miles of telephone line and, later, handed it over to the Post and Telegraph Department only to be advised that his company was to be charged for using it and was asked to ‘investigate the most trifling irregularity in the service’ conducted by company clerks. The supply of bread and meat was unsatisfactory, so one of the workers was appointed to the position of both baker and butcher. Bread was made at set intervals and cattle obtained from the company’s herd of some 200 beasts and killed three times a week; he sold his produce over the shop counter, ran his own motor car and had his ‘rooms fitted with an elaborate wireless set and other devices.’

The settlement had its own general store, fully stocked, where items were sold at reasonable prices, and a chemist, while sporting enthusiasts were provided with a cricket and football oval, croquet ground and golf links. Electricity was provided to all houses and commercial buildings, an agency for two banks was conducted by company clerks while, in the mid-1920s, arable land within the leasehold was planted with barley; thus, ‘all of the 14,000 acres [sic - other reports state 200 acres as the total holding] held in the lease [was] being tested for its full productivity.’ 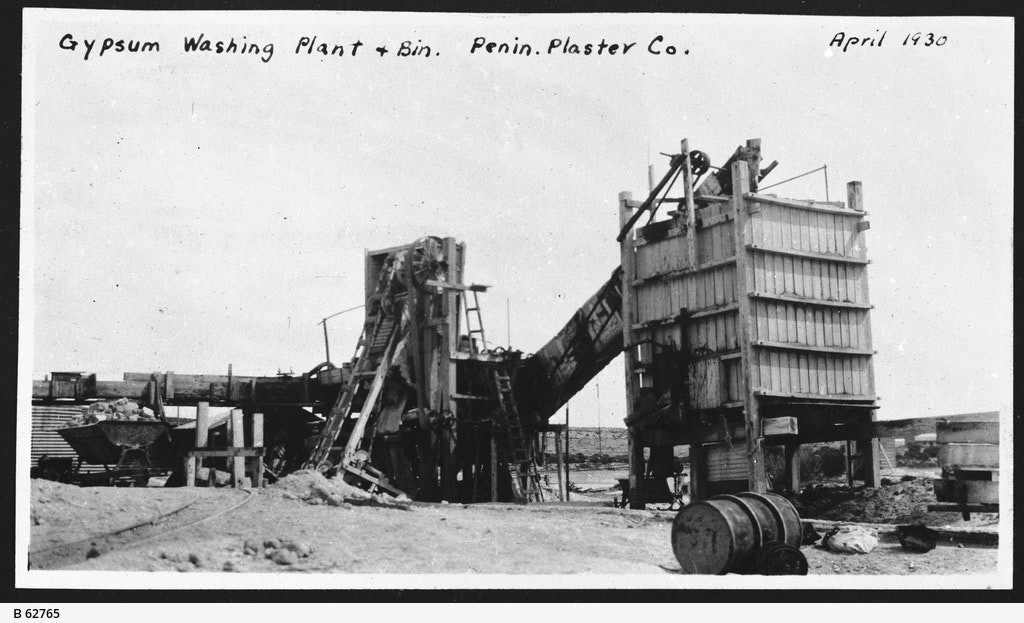 INNESTON: A gypsum washing plant and bin at the workings operated by the Peninsula Plaster Company at Inneston, South Australia 1930.

INNESTON: Distant view of the premises of the plaster factory operated by the Peninsula Plaster Company at Inneston, South Australia 1930

The people after whom this little town is named are true pioneers. The plaster works are continually being improved, and machinery is doing most of the heavy work. In spite of the slack times they seem to have steady output of their product, and each month the steamer turns up for a load, to say nothing of the numerous calls during the year from ketches. The company have constructed their own jetty and have a good depth of water, practically the same as Edithburgh. Private enterprise has the knack of doing things cheaper and better than our much-governed Government concerns, and with a few more such jetties for the Peninsula and a good set of roads we need not waste money on railroad systems that would not pay for axle grease. Inneston is quite a self-supporting little town, with its own store, butcher, baker, and milk round. The day school belongs to the company and has a public school teacher provided by the Education Department with a school of 21. The school building is used for all public functions. The people live in houses which the Company construct, and many have very comfortable if not very elegant quarters. There is a boarding house with all appliances for the single man. To the initial work of transforming the gypsum into plaster paris, the Company have added farming and several Fordsons are at work rolling scrub and clearing the ground for cultivation. They are now able to grow their own hay for the woodcarting teams, and produce a large number of bags of barley The ground has responded well, and last year the crop was good. This year there will be several hundreds of acres under cultivation and it looks as if they will have a fair amount of barley as well as plaster. The Company have been responsible for making up most of the boggy patchcs on the road to the Cape, and have given the Government a good lead in most things. Last year the Rev. V. Goldney, of Yorketown, looked towards the Cape and went down and met the people and gathered the children together for Sunday school and the parents for church .The Sunday school scholars take a keen interest, and the work is progressing. The services are well attended, and the work is proving that the venture was more than worth while.

On Sunday evening, July 15, at about 7.30, Messrs. J. A. E. Lange and C. Hacker were returning to Inneston from Yorketown and when about six miles of the journey had been covered the front near-side tyre blew out, and the car swerved into a postand-rail fence and ran down an embankment until stopped by a stone wall. Both occupants were thrown out. Mr. Hacker found Mr. Lange unconscious, and noticed that the car was on fire. He immediately went to Mr. McEachcn's farm for assistance. On returning with Mr. McFachen and Mr. F. Anderson he found Mr. Lange had recovered, but was walking about in a dazed condition. They motored him to Yorketown. M. C. Lodge was informed early on Monday. He inspected the car and interviewed the occupants. It was gleaned that the car was insured for £250. Neither of the men were smoking at the time of the accident. The body of thc car was completely destroyed. The fire was evidently caused by a strong wind blowing flames under dash from the carburetter.