On Sunday afternoon a solemn commemorative service was held at Minlaton, to mark the unveiling of the monument erected as a memorial to those who enlisted from the town and district in defence of the Empire in the Great War of 1914-1919. There was a large concourse of people present. Relatives of soldiers and returned men were assembled near the Monument. Seated on the platform were:— Mr. Jas. McKenzie (Chairman of the Memorial Committee), General S. Price Weir, D.S.O., Messers. H. G. Tossell and P. Allen, M's.P., Revs. C. W. Swan (Anglican). J. H. Pointon (Methodist), and R. Plowes (Baptist). After an appropriate instrumental selection, beautifully and feelingly rendered by the members of the Orchestra under the conductorship of Mr. Carl Thomas, all present joined in the hymn "O God, Our Help in Ages Past." The following prayers were then offered by the Rev. C. W. E. Swan :—

Almighty God, look with Thy favour and benediction upon this memorial, on which are recorded the names of our soldiers who offered their lives in the holy cause of freedom. May we hold them ever in the grateful recollection of our hearts. Let this memorial stand as an abiding witness of the devotion of Australia's sons and daughters to their fatherland and a constant incentive to our prayers. May the inspiration of their example move other men to offer like sacrifices, teaching us to live and die for faith and freedom. And grant to our nation a penitent and believing heart, that we may reap the fruits of victory and enjoy the blessing of peace. Through Jesus Christ our Lord.

O God, our merciful Saviour, who hateth nothing that Thou hast made, and willest not that any should perish, we humbly commend into Thy hands the souls of our dear brothers whose names are here remembered, beseeching Thee to wash them in the blood of the Lamb that was slain to take away the sins of the world, that whatsoever defilements they may have contracted in this world through the lusts of the flesh or the wiles of the devil being purged and done away, they may enter into Thine eternal Kingdom, through Jesus Christ Thy Son our Lord, who liveth and reigneth with Thee in the unity of the Holy Ghost, one God, world without end.

Remember, O Lord, all those, the brave and the true, who have died the death of honor, serving Thee in their death, and are departed in the hope of Resurrection to eternal life. To Thy love and to Thy mercy we commend them, Who art the comfort of those that mourn and the victor over death. In that place of life, when sorrow and mourning are far banished, give them rest, O Lord, and peace in the land of hope, where light eternal shines upon the souls of the faithul, through Thy merits, O blessed Reeemer, Who with the Father and the Holy Ghost livest and reignest, one God for ever and ever. Amen.

The Rev. J. H. Pointon read the lesson from Ephesians vi. 10-19. after the singing of "The Recesional'' by the congregation, the Chairman asked Mrs. M. R. Peterson to unveil the Monument, which she did reverently and feelingly. As the Union Jack disclosed the statue the "Last Post" was sounded by Sergt. Fred McKenzie. The audience silently stood with hats removed and heads bowed until the final notes had passed away.

General Weir, D.S.O., said that it appeared to him in that this was a very solemn and eventful moment in the history of Minlaton, and one which would not soon be forgotten, for it was, so far as this town was concerned the closing scene in the drama of the world's greatest war. He was glad that Mrs. Peterson, who had lost three brave sons and a brother in the war, had been selectes to perform the ceremony of unveiling the monument. He felt sure that the sincere prayers of all present was that the Great Architect of the Universe would comfort and sustain her in the great sorrow she was passing through. Mrs. Frank Poole, who also, like Mrs. Peterson, sent four sons, was more fortunate, and was to be congratulated on their safe return. Continuing, Gen. Weir said he considered it a great honor to have been invited to attend the ceremony and to join with the people in honoring the memory of the brave men from this town and disrict who so promptly and voluntarily responded to the call, the men who went away so cheerfully, and fought so bravely. He considered that Minlaton had reason to be proud of the fact that it was represented by 111 soldiers and three Y.M.C.A. workers. He sympathised with them in the loss of 30 of their brare fighters—their loss had been very heavy, and was 15 per cent, higher than the average for the Commonwealth. These men died the noblest death a man can die, fighting for God, for King, and Liberty, and such a death, is immortality.

They shall not live to grow old,

As we who are left grow old ;

Age shall not weary them,

nor Length of years condemn,

At the going down of the sun and in the morning

We will remember them.

This stately Monument world serve in a very fitting way to help them for generations to come to remember the noble sacrifice made by the men of this town and district. Gen. Weir suggested that it would be very fitting if once a year a united memorial service was conducted around the Mounment, and considered that it would be nice if on each recurring anniversary of the death of the brave men whose names were inscribed on the Monument, flowers were hung on the Monument. He also expressed the hope that the children would be taught to reverence the Monument and raise their hats in honor of their noble dead each time they passed it. He felt that on an orcasion such as this there were many sad hearts in the gathering— hearts which were longing alas in vain for the touch of a vanished hand, the sound of a voice that was still." To all such the profoundest sympathy of all present, he felt sure, was extended. Their loved ones died as heroes, and

They played their parts.

Their lives they've given,

They live on earth to-day, in word and deed,

As truly as in heaven. 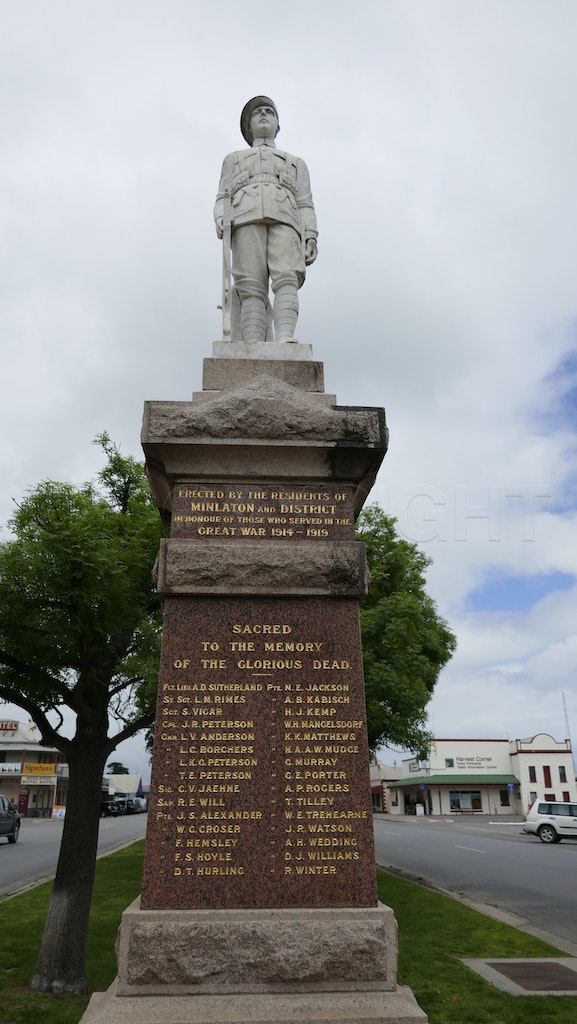 He congratulated the Committee on having decided to erect a Monument to perpetuate the memory of their brave men's noble deeds, personally be favored a Monument such as they had selected to any other form. Other forms sush as buildings, etc, would, in the course of ages lose their identity, but this Monument would speak to generations to come of the splendid response made by this town when our great Empire was in peril —it will speak when time with us shall be no more We poor human beings, notwithstanding our gift of speech, have constantly to resort to the language of symbols when it comes to expressing the most sacred things in this life. Hence we partake of bread and wine—symbols of the Greatest Sacrifice ever made, hence we erect monuments to speak when we are silent. As the wedding ring is an emblem of the infinite relationship between husband and wife, so is this Monument an emblem of the in finite relationship between you good people and the men in whose honor it has besn erected. Gen. Weir said he was glad to know that the voluntary response of the people in this district had been so generous that sufficient money had been received to pay for the Monument and that a fair balance was in hand for the erection of a fence, etc. He was glad because to take up a collection at the unveiling of a soldiers' memorial spoiled the solemnity of such a ceremony.

The people of Minlaton had many who had distinguished themselves in the war, but, he ventured to say that none them had brought greater honor to the district than Captain Butler, the gallant flyer, who had delighted and thrilled not only the people of this district where he was born, but the people of Adelaide — in fact, throughout South Australia his name is a house hold name. When he met with such a dreadful accident some time ago everyone watched the daily papers with feverish interest to learn how he was getting along. Had he been the King of England, no greater interest could have been shown. We are glad to know that he is now fit and well again and hope that for many years to come he will be spared to live in this district where he is so highly respected and so well known. Gen. Weir said he was glad that the names of the three Y.M.C.A. representatives were on the Monument, for he could not speak too highly of the sacrifices they had rendered. He knew Mr. Hartley Cross well : his services both at home and abroad were something that Minlaton had cause to be proud of, and although he did not know the other two men, he felt sure that they had also done their duty faitiifully and well. In conclusion he thanked the children in the Minlaton Public School for contributing £138 12/2 to the patriotic funds during the war. He mentioned that the State schools of South Australia had raised £53,385 for that purpose. He thanked the people of Minlaton for the magnificent response to the S.A. Soldiers' Fund, made on four successive Australia Days, the total amount raised being £2312. This was splendid and worthy of the big hearted people of this district. He also wished to thank the members of the Red Cross Society and League of Loyal Women for their noble work. They had supported the boys at the front most nobly and generously and had, by sending socks and warm underclothing, saved the lives of many a man during the severe winters they had to go through. He expressed the hope that the war clouds now threatening would not mean war again— but he felt sure that "Australia would be there" again if needed. We are all longing for the time when men shall beat their swords into plow shares and their spears into pruning hooks, when men shall learn the art of war no more then

These things shall be:

A loftier race than e'er the world hath known shall rise

With flames of freedom in their souls and light of knowledge in their eyes;

Nation with nation, land with land, disarmed shall live as comrades free;

In every heart and brain shall throb

The pulse of one fraternity.

The hymn " Rock of Ages " was sung, and after the National Anthem had been rendered, the Rev. R. Plowes closed the ceremony with the Benediction.

A large number of wreaths were placed at the foot of the Monument at the close of the service.

The following names are engraved on the Monument:— 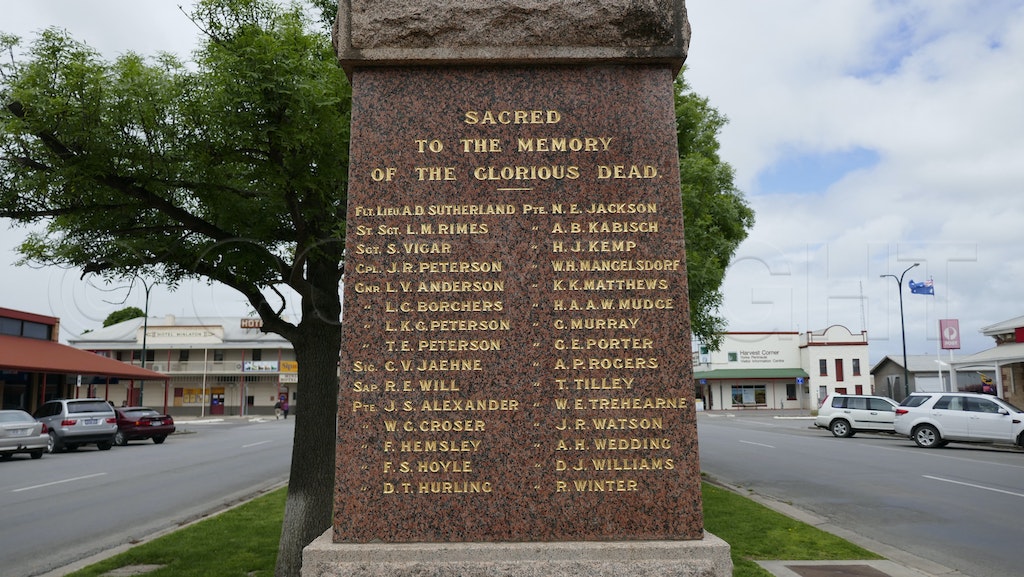 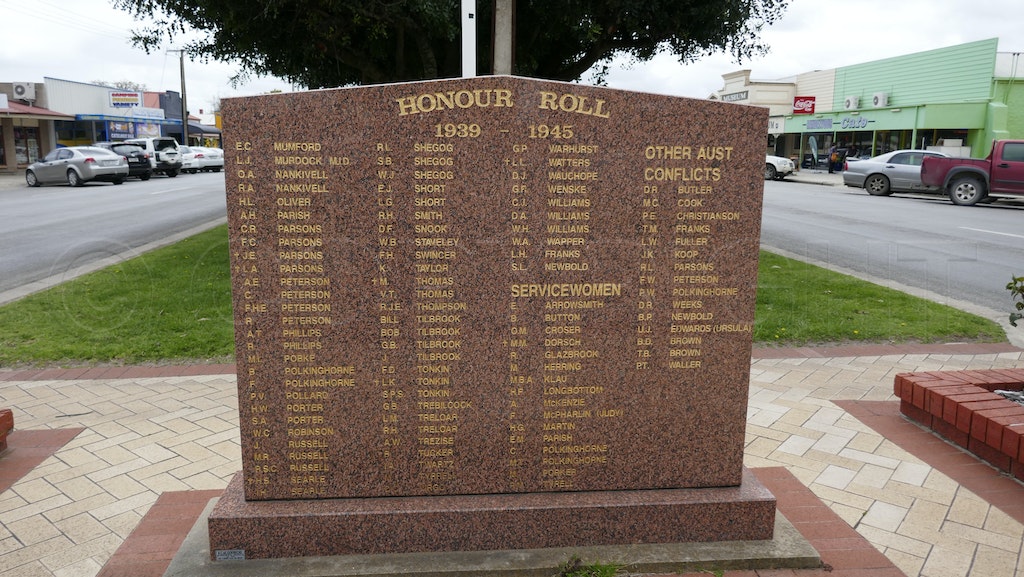