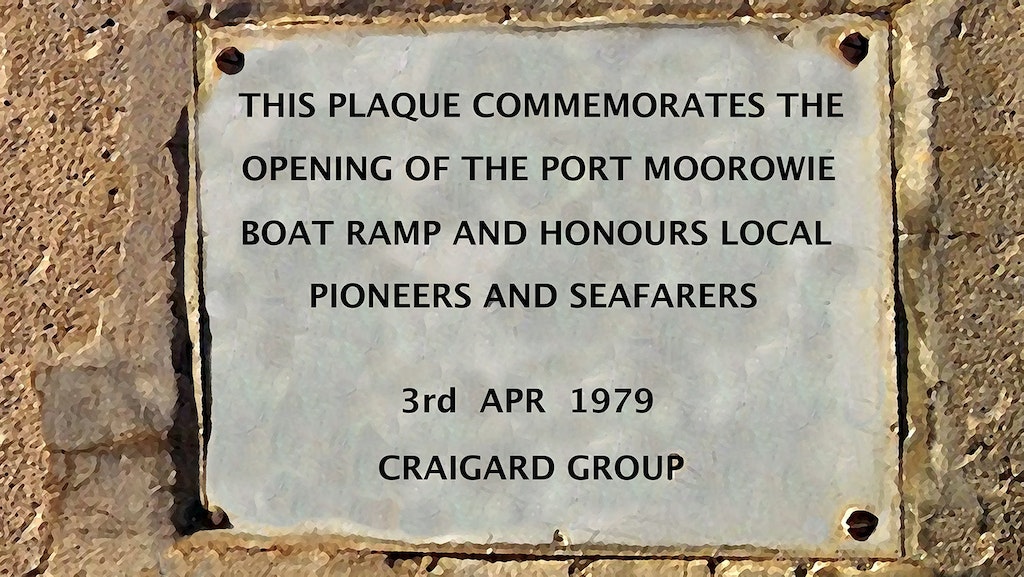 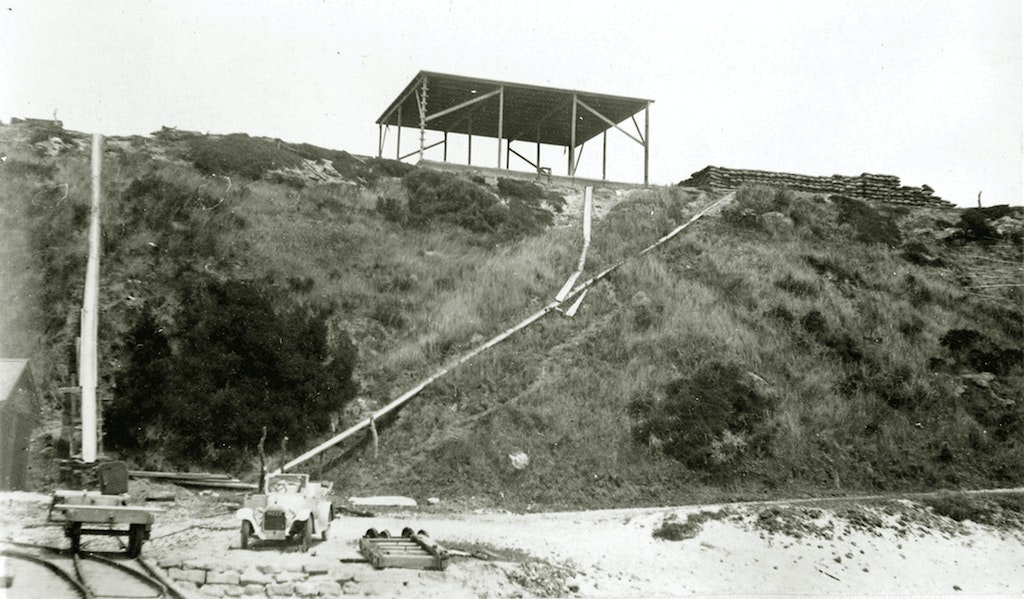 Wheat stacks and a shed on the top of a cliff at Port Moorowie in South Australia; conveyor machinery for transporting the grain to the beach below has been built into the cliff. 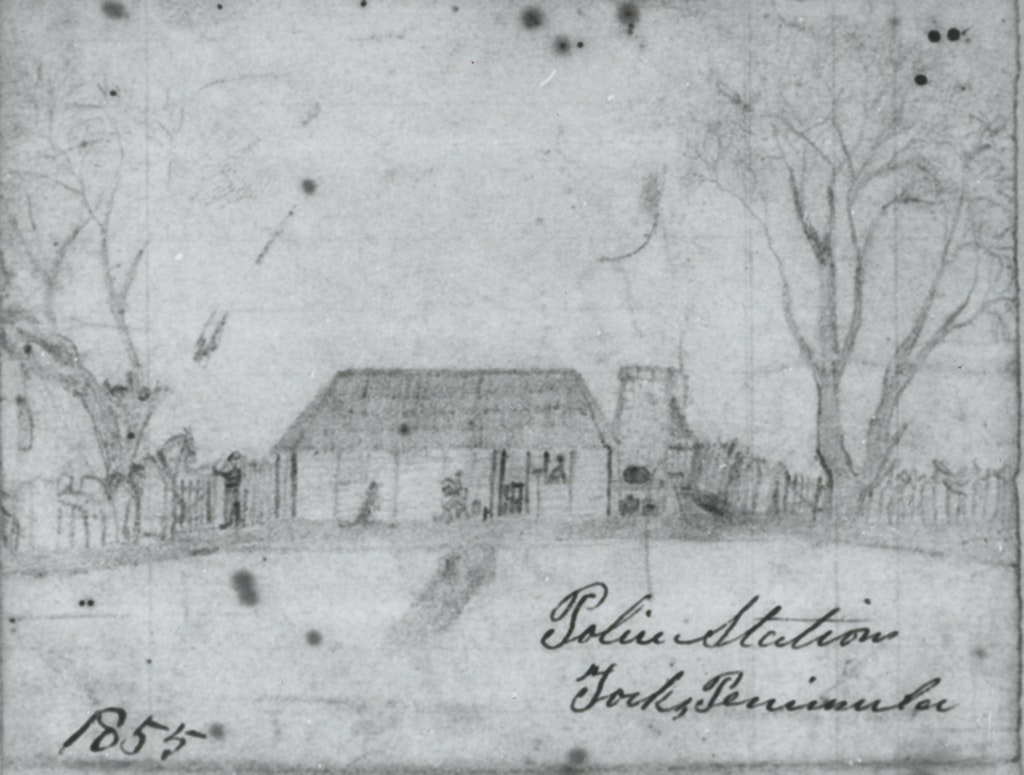 The Moorowie run, which had its homestead about 9 ½ kilometres east of where the present town of Warooka now stands, was leased by Wm. Fowler in 1859*. It is to him that the introduction of rabbits to Yorke Peninsula is attributed**. *The Ill Shaped Leg. Page 36 *Four Make One. Page 7.

It was only a few hundred yards from his homestead that the first police station on Yorke Peninsula was built (the ruins of the homestead and station can still be seen along the road past the rubbish dump).

Trouble had been occurring between shepherds and the blacks. Sheep had been stolen and shepherds speared and mutilated. Reprisals had been made and sometimes blacks had been wrongfully accused of crimes committed by the whites.

Three or four police troopers had been stationed at Moorowie to quell such troubles*.
*Family Life in South Australia. Page 172

One incident, reported by a hutkeeper, Jack Grainger, was of an occurrence when an aborigine was accidentally shot. According to the hutkeeper, the aborigine had been employed minding lambs; when receiving his payment of clothes and tobacco, etc., the native declared he was entitled to some flour. On being refused, he shouted, "Suppose you no give, me take it." With that he rushed for a loaded gun which stood in a corner of the hut. A struggle ensued and the gun accidentally discharged, the ball striking the aborigine in the forehead and emerging from the rear of his head. The constable, from the Moorowie Police Station, sent to investigate the matter, found the bullet lodged in the doorpost. He also noted that the wound in the forehead showed fragments of bone pointing outwards whilst at the wound in the rear of the head the bone fragments had been driven inward. This obviously indicated the falsity of the hutkeeper's story.

Dragging the corpse to a nearby log the officer severed the head from the body with an axe; burying the body, he returned to the police station, taking the head with him.

At the station he soon learned that this was not the correct procedure for gathering evidence and he returned to the grave and buried the head alongside the body.

After his report was received at headquarters he was instructed to proceed to Adelaide with the hutkeeper and to bring the head with him.

When the body was exhumed the head was missing. The hutkeeper assisted in the search and appeared as mystified as the officer at the disappearance of the head.

The constable, with the hutkeeper, went to Adelaide but as there was no evidence to refute the hutkeeper's story he was soon set free*.
*Family Life in South Australia. Page 179

Proceeding by the south coast eastward for about twenty miles Tucockcowie in passed through a small station formerly owned by Mr. W. Gilbert, of Pewsey Vale, but now in the hands of Messrs. C. & J. Day, and Port Moorowie is reached. There is not much farming along the line of road. At Port Moorowie, and from there to Mount Melville, most of the ground is taken up, but the area of good land is extremely limited. The population is small, the farms are poor, and the paddocks are nearly all very dirty. Not more than five or six bushels will be reaped through most of the district, although three or four paddocks looked as if they would yield about eight bushels. There is a good jetty at Port Moorowie, which is used only for shipping wool and wheat. The village of Mount Melville has decayed considerably, and the little public school which was formerly conducted there has been closed.

South-east of the station some 12 miles by the road. A private township has been surveyed here, and a good deal of land which belonged to Mr. Fowler has been sold. The Government are now surveying a township, Mr. Herbert and party being engaged in the work. It is anticipated that not less than 100,000 bushels of wheat, besides wool, will be shipped from Port Moorowie there season, and a jetty is badly needed this. It is situated in the bend of a wide bay, the eastern point of which is Troubridge Hill, and the west Point Gilbert, a rocky bluff about a mile from the township. Tha port is protected by a reef running out from the end of Point Gilbert and bending round in the form of a half-circle through which there are two openings buoyed off, with a depth of 9 feet at low-water. The basin inside, in which a number of vessels could ride in safety, has an average depth of 2 to 3 fathoms, with good holding ground in a clay bottom. The land around is of average quality, and so are the crops where early sown, but the late-sown ones are very light. On Wednesday morning we left Moorowie for Yorketown, thence to Edithburgh, and found the Glenelg at the jetty, where she arrived after having a rough night round Cape Spencer. Leaving Edithburgh at 11.45, she reached Port Adelaide about 4 p.m.

YORKETOWN, February 5, — a family reunion took place at the residence of Mr 0. Bishop, jun., on Thursday to celebrate the 90th birthday of Mr. Charles Jolly,

Sen. Mr. Jolly came from Vague parish, near Truro, Cornwall, and he left with his parents when a lad to come to South Australia. His father and Captain Frome were among a party who came out to survey land in South Australia. Captain Frome was afterwards the head of the Survey department. The city of Adelaide had just been surveyed by Colonel Light. As a lad Mr. Jolly was engaged in various pursuits. Running away from home, he joined Mr. Coutts, at Brighton, in working the first threshing machine introduced into the State. He was married at the age of 21 to Miss Jane Jolly, and he farmed at Reynella for 16 years, where Mrs. Jolly died. In1872 Mr. Jolly came to the Peninsula, and farmed near Port Moorowie, remaining there until he retired 11 years ago. He is residing at Oakland, and frequently walks to the town and home again. Mr. Jolly was married twice, and has brought up a family of 23 children, namely:— Mrs. Smith (Saddleworth), Mrs. Beare (W.A.), Mrs. Thomson (Woodlands, Port Moorowie), Mrs. Klem (Saddleworth), Mr. C. Jolly (Oaklands), George (Port Moorowie), Walter (Williamstown), Alphonso (East Adelaide), Herbert (East Adelaide), Waldo (Unley), Henry (Unley), Mrs. F. Brook (Coobowie), Mrs. P. Daniels (Coobowie), A. Bartram (Coo-bowie), J. Brook (Oaklands), Miss Jolly (Oaklands). Mr. Jolly, whose memory is still wonderfully retentive, often speaks of the difficulty experienced in getting the women and children ashore from the ship Recovery when they landed at Port Adelaide in 1839. They had to be carried on the men's backs through the mud.