Mr. Robert Hamilton Sandilands, of Myall avenue, Kensington Gardens, who died recently, was born at Stonehouse, Lanarkshire, in 1841. He came to South Australia in the ship Oaklands 43 years ago. and first worked on the estate of the late Mr. W. H. Grey at Reedbeds. Later on Yorke's Peninsula he followed farming pursuits at Mullowurtie, being one of the first settlers in that district. The place was named after him Sandilands. On account of dry seasons he moved to Port Victoria, where he resided 30 years, took a keen interest in the wel-fare of the town, and carried on a successful business. He left the locality eight years ago on account of ill health. He has left a widow and five daughters — Mesdames Lovelock and Harrison (Smoky Bay), Dunstone (Payneham), and Bray Parkside), and Miss Sandilands (Kensington Gardens). There are 13 grandchildren.

Amongst the churches of the Ardrossan Circuit, Sandilands hold an honoured place. Its devoted and enthusiastic workers decided, that its twerity-"first anniversary should be marked for special recognition. Under ideal conditions the event was celebrated on March 9 and 12, and the highest hopes realized. The origin of our spiritually prosperous cause at Sandilands is traced to the results of a special mission conducted in the home of Mr. L. G. Rowe, by Messrs. S. Forsyth and T. P. Willason, during the ministry of the Rev. G. H. Paynter. It proved to be a season of ingathering and of inspiration for Christian service. On March 31, 1908, a Church Trust was formed. The original trustees were J. H. Beer, B. F. Beer, E. Glover, H. Bawden, jun., F. H. Baldock, C. Bockmann, H. A. Gersch and L. H. Rowe (hon. sec.). Of these, the two lastnamed continue in service. Messrs. A. J. Sanders, H. Burrows and F. E. Gersch (treasurer) are members of the present trust. The church site was purchased from the Baptist Union for £3 10s. At a cost of £300 the church was erected. On November 11, 1908, the foundation stone was laid by Mr. H. Bawden, sen. , Ministers officiating were the Revs. G. H. Paynter and O. . Lake. Opening services were held on February 8, 1909. Mrs. J. Sawley performed, the ceremony of, turning the key. . The musical portion of the programme was provided by the Ardrossan choir, several members of which assisted again at the recent celebrations. At a later date the need of a -Sunday-school hall called for further effort, while the Rev. J. H. Crossley was minister of the circuit. Towards the total cost of £380, in the task of raising funds the services of two collectors are gratefully remembered, Miss P. Rowe, with £100, and Mrs. A. J. Sanders," a close and worthy competitor. The foundation stone was laid by Mrs. T. Pearson, and the new building opened by Mrs. J. H. Crossley on August 15, 1921. The property has recently undergone a thorough renovation, and its condition is a credit to its people. A golden.Sabbath greeted those who met at the "birthday" services. Two powerful and inspiring messages were delivered. by the. Rev. Cv Jones, of Maitland. Miss Moody • contributed two solos, and the choir, ably led by Mr. Eustace Illman, rendered excellent service. Congregations were of the overflow order. ' On the following; Wednesday high tea began it 5 p.m., and continued until the commencement of the public meeting, i which was .presided over by Mr. H. •Bawden, sen., who has almost reaqhed his ninetieth milestone. The chairman, who is. greatly, and •deservedly revered by our people, in a most. interesting •address, carried his hearers back to the day of sm^U beginnings, and concluded with an original poem, written out of lifs own^expeneiices, Jon "The Troubles of a Scrub Farmer." Hearty words of welcptoe were offered to Mr, F. H. Baldock, Mr. and Mrs. S. G. Simmonds, Mr. and Mrs. F. H. Rowe, and Mr. and Mrs. S. Edwards, who had

Rowe ? linked up the past with the present', in a much-appreciated report and record. He expressed his pleasure, and the pleasure of the Sandilands friends, that Mr. H. Bawden, sen., had been spared to -preside over the meeting; gave greetings from old acquaintances who were vrnable to be present; gratefully recalled the names of those who were once co-workers with them, including the Kittos, Dellows, Smiths, Richardsons and Miss Beer, and referred sympathetically to the memory of Mrs. H. Bawden, jun., Mrs. F. H. Baldock and Miss Nellie Rowe, who had been called to higher service. The Rev. T. P. Willason received a welcome as. sincere as it was enthusiastic In happy reminiscent vein the story of the mission was retold, with touching incidents of the greater and heavier duty of the mission work now entrusted to him. By special request he sang an old favourite, "The Bird with the Broken Wing." The circuit minister feelingly referred to his pride in the church and its people, to the splendid spiritual tone and the devotion, harmony and unitl in every branch of the church service. A vote of thanks followed to all who had tendered assistance. In the proceedings the Ardrossan Methodist choir played a valued part. It was iriost appropriate that such a gathering should begin and conclude with the tribute of thanksgiving in the Doxology. 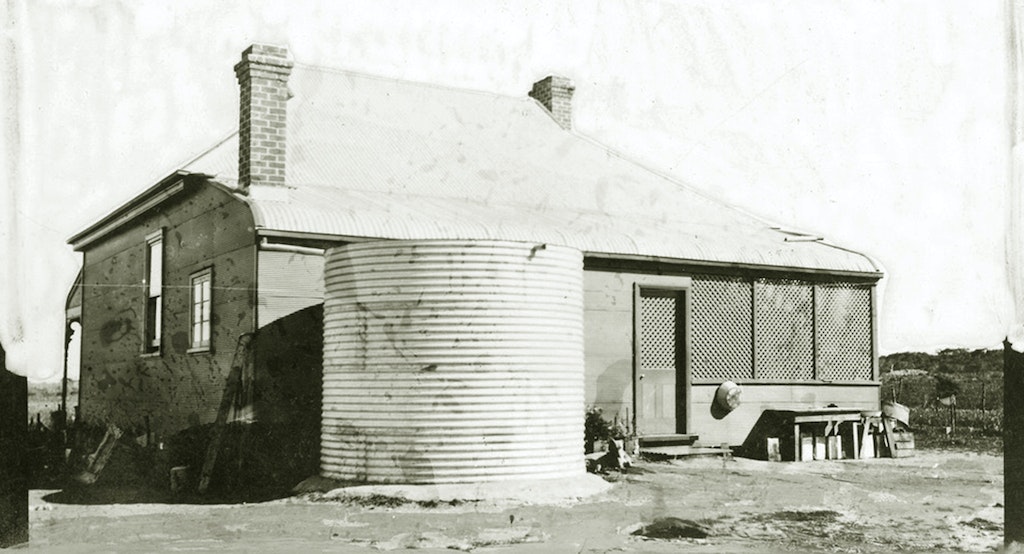 The back view of a house at Sandilands near Maitland, Yorke Peninsula, where 17 year old Eleanor Louise Bockmann was murdered on 8 September 1922 by Herbert Cyril Curnow. The Observer newspaper reported "The home of the Bockmann's. The girl ran from the house and fell close to the galvanised-iron tank where she died in the arms of her father."

Holt tractor (caterpillar) being refuelled at 'Rockleigh', at Sandilands on the Yorke Peninsula. To see a selection of photographs in this collection, search on Archival number PRG 1642/57. 1928 - State Library of South Australia -